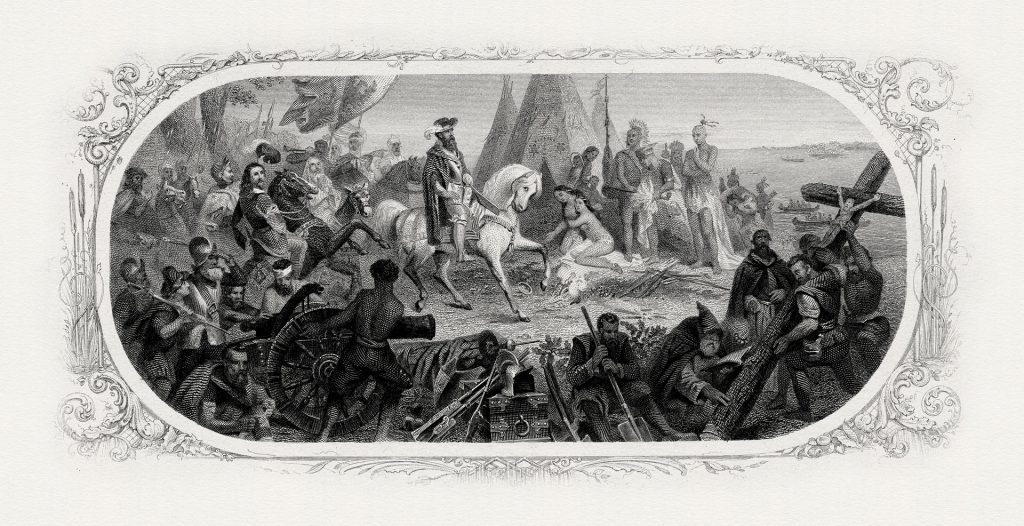 When Europeans arrived in the Americas, they found a vast variety of cultures from the hunter-gatherers of the Canadian arctic to the fantastic civilizations of Meso- and South America. Despite the huge diversity in social and political sophistication and the many achievements of pre-Columbian cultures, they were all stone-age societies. The teeming cities of the Aztec Empire, the complex systems of cultivation and irrigation of the Andes cultures, the astonishingly accurate calendar and mathematical finesse of the Maya and the superior political philosophies of the Iroquoian peoples may bring into question the value of such a crude label. From a technological point of view, however, it can be said that the tools with which the aboriginal peoples of the Americas worked were inferior to those of the newcomers.

The history of the Americas has often been portrayed as the inheritance of a civilization stronger technologically, culturally, spiritually and numerically from a series of weak and primitive cultures. There is little question about the technological advantages possessed by the Europeans. As for the other supposed advantages, there is considerable doubt.

In the 19th century, when Europeans began to settle modern day Southern Ontario in numbers, the settlers found the province thinly populated by its Anishinaabe inhabitants. Indeed, the settler population of Upper Canada may have equalled that of the aboriginal as early as 1785. This is the very beginning of the colonization in the province. The settlers considered much of the province to be “idle” land though the difference in land use between agrarian and hunter-gatherer societies, in fact, accounted for this misconception.

These relatively small numbers led historians to conclude that Europeans had inherited an empty wilderness. The forests, however, had not always been so empty. Champlain reported in 1615 that the population of Wendake had been 30,000 people. Pre-contact demographics are extremely difficult to determine and a great deal of debate persists as to the true size of aboriginal populations throughout the Americas. A contemporary estimate of the Iroquoian population of southern Ontario (Wendat, Tionontatehronnon and Neutral) at contact posits the figure of 75,000 – many times the size of the Anishinaabe population at the end of the 18th century.

The truth is that aboriginal populations throughout the Americas had dramatically declined since the arrival of Europeans in the “New World”. The primary agent of this devastation was not European steel but European pathogens. Thousands of years of isolation had left aboriginal Americans with no immunity to measles, influenza, rubella, chicken pox, typhus and, above all, smallpox. In Europe, an infectious disease such as smallpox, was endemic. The disease ran through the population, relatively small numbers became sick and died while others recovered from the illness. Others exhibited no outward sign of the disease. These survivors became immune to the contagion. Most of these diseases killed only the young and elderly.

When Old World pathogens were brought to the New, the inhabitants lacked immunity. Endemic diseases in Europe became epidemics and pandemics in the Americas. The carnage created by these contagions in the New World puzzled both the First Nations and Europeans. A German missionary reported in 1699 that “the Indians die so easily that the bare look and smell of a Spaniard causes them to give up the ghost”. Some estimates claim that as many as 90 million people may have succumbed to disease after the arrival of Europeans in the Americas, perhaps 90% of the pre-Columbian population. As Ronald Wright states in his book Stolen Continents, “it was the greatest mortality in history. To conquered and conqueror alike, it seemed as though God really was on the white man’s side”.

Indeed, disease may have arrived, in many cases, before the invaders. A strange disease killed the Inca Huayna-Capac and many in his court between 1525 and 1527. These deaths threw the Inca court into confusion as the succession was uncertain. The disease may have been smallpox introduced by a Spanish party who had been reconnoitring the coast or it may have come overland from Columbia. Shipwrecked Spaniards may have infected parts of Meso-America in the same way in advance of Hernán Cortés.

Some evidence exists to suggest that the interior of North America suffered from unknown epidemics in the 16th century. Indication of recent depopulation and the abandonment of sophisticated social practices greeted early visitors to the southeast of the present United States. Although little direct evidence exists, some scholars have suggested that the entire population of North America was affected by massive epidemics beginning in the early 16th century. 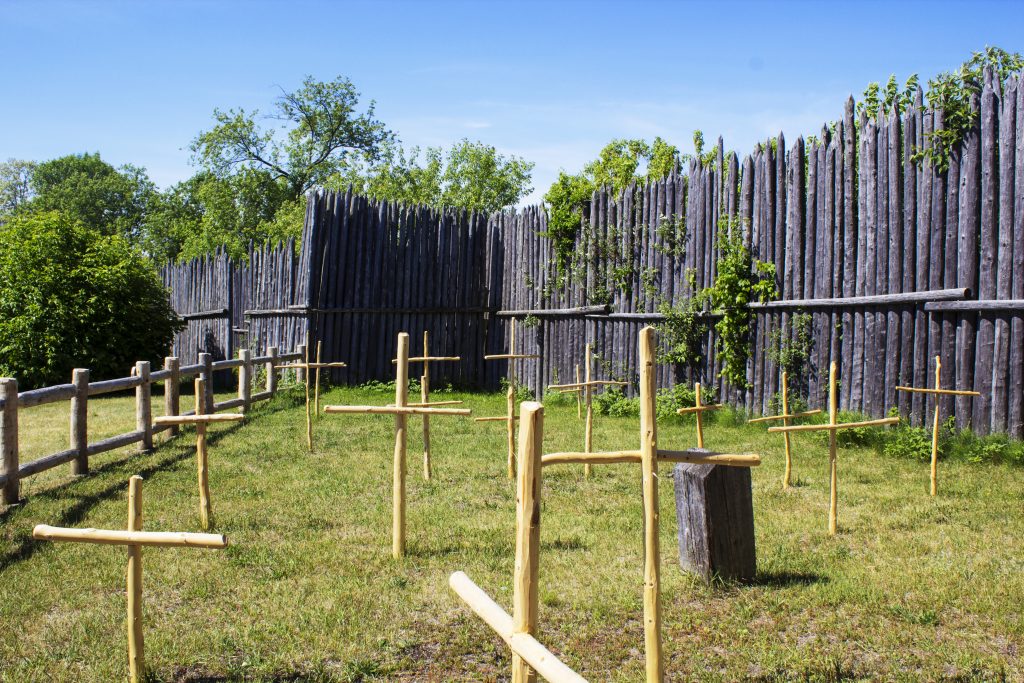 The mysterious disappearance of the St. Lawrence Haudenosaunee between 1542 and 1603 has baffled historians for many years. Warfare between the various Iroquoian peoples has often been suggested as a possible cause. An equally plausible explanation, however, is that the population was so devastated by disease as a result of their contact with the French that they could no longer sustain their villages. Jacques Cartier brought back from his voyages an account of an epidemic that raged in the village of Stadacona in the winter of 1535-36.

Whether or not epidemics predated the arrival of Europeans in Wendake, the presence of missionaries and other Frenchmen after 1615 had a demonstrably disastrous effect on the Wendat. Population estimates for Wendake range from 16,000 to 50,000 prior to the outbreak of epidemics in the 1630s. Champlain’s figure of 30,000 still seems reasonable. The truth will probably never be known. What we do know with a high degree of certainty is that the population was reduced to approximately 9,000 by 1640. This massive demographic change took place over a period of 25 years.

The destruction of Wendake left the Iroquoian populations north of the Great Lakes scattered or absorbed into that of the conquering Five Nations. Taken as a whole, the population of the “Wendat and Haudenosaunee” are estimated to have reached a low of 8,000 people by the middle of the 18th century. The Great Lakes Iroquoian (Wendat, Tionontatehronnon, Neutral and Haudenosaunee) possibly numbered between 110,000 and 160,000 at contact. If these figures bear any relation to reality, the reduction in the population of Great Lakes Iroquoian within the first two hundred years after contact is in excess of the 95% estimate for the Americas as a whole.

It is not as easy to document a similar decline among the Anishinaabeg of southern Ontario in the 18th and 19th centuries though there are a number of accounts that suggest a profound decline after the arrival of European settlers. The Mississauga on the north shore of Lake Ontario, for example, declined from about 500 people in 1788 to 191 by 1827. In 1793 an epidemic consumed the populace of the Lake Simcoe area. One victim of this outbreak was Chief Canise who died in the autumn of that year.

Disease acted like a “fifth column” of the European invasion. Contagion spread before the newcomers and accompanied them upon their arrival. The result was a thinning of aboriginal populations and consequently, the clearing of space for settlers. In other parts of the world, Europeans did not supplant the indigenous people (with the exception of the equally isolated Australia) because the indigenous populations were no more susceptible to European disease than the Europeans themselves. Many aboriginal people in North America were never subject to military attack, they were simply sapped of their strength by disease. Smallpox is the true conqueror of the Americas. The alliance of the Europeans and their accompanying microbes was acknowledged by General Sir Jeffrey Amherst when he instructed the commander at Fort Pitt to issue blankets infected with smallpox to First Nations people during Pontiac’s War.

The effect of the devastation on those who remained must not be ignored. The loss of so many loved ones, the destruction of their society and the apparent failure of their belief systems inevitably demoralized survivors. The decline in numbers as a result of mortality was soon compounded by a fall in birth rate. Women would often seek abortion rather than bring life into such a world. The Haudenosaunee had arrived at such a position in 1799 when Handsome Lake had his vision.

The degree to which disease and its accompanying social ills contributed to the fall of Wendake is difficult to assess. It can be said, however, that Wendat society was torn by divisions that can be traced to the stress of epidemic. The relatively small numbers of Anishinaabeg who replaced the Wendat, Tionontatehronnon and Neutral in Southern Ontario were similarly assailed by European disease. In the end, the European settlers (erroneously) regarded the land to be empty.  The fifth column had been doing its work for a century and a half before the arrival of the Loyalists at the end of the 18th century.