The Coming of the Anishinaabeg

After the destruction of Wendake, the Haudenosaunee League turned its attention to other neighbouring nations. The Tionontatehronnon were dispersed in 1650. Between 1650 and 1651 the Neutrals were attacked and scattered and the Erie defended their villages for a number of years but were decisively defeated by 1655. Wendat refugees who had sought sanctuary with their neighbours were, once again, made homeless or absorbed into Haudenosaunee society.

With their Iroquoian neighbours defeated, the Haudenosaunee could raid with impunity. Some Mohawk raids are said to have penetrated as far as the rivers draining into Hudson’s Bay. For many years the Haudenosaunee attacked in every direction in an effort to disrupt the flow of goods between the Upper Great Lakes and Quebec. In so doing, they encountered nations with whom they had had little contact in the past. One of the groups that felt the wrath of the raiders was the Anishinaabeg of the north shores of Lakes Huron and Superior. 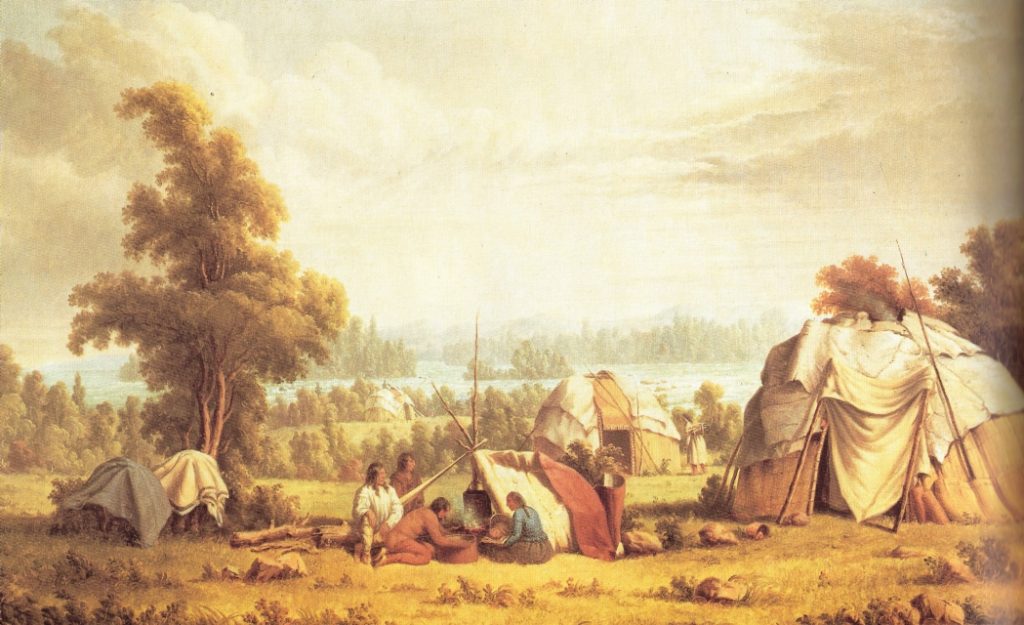 The Anishinaabeg were, of course, part of the trading network established by the French and Wendat. They were at the end of the trading routes to the west at that time and, while the French merchants and Wendat middlemen became wealthy as a result of the fur trade, the Anishinaabeg managed merely to develop a dependence on European trade goods. The destruction of Wendake had momentarily halted the flow of goods from the Upper Great Lakes to Quebec, but the fur trade would soon adapt to the changed circumstances and the people of the Upper Lakes would take a more prominent role than before.

When the first settlers arrived in Ontario in the early 17th century, the Anishinaabeg were living in small groups from the north shore of Lake Superior to the shores of Georgian Bay around modern-day Parry Sound. Unlike their sedentary Iroquoian-speaking neighbours to the south, the Anishinaabeg could not be said to have a national organization. The Wendat, it will be remembered, had a confederate system of government made up of five nations, each autonomous in its own right. As we shall see, the hunter/gatherer mode of existence of Algonkian groups did not lend itself to complex systems of governance.

The Anishinaabeg, like other groups occupying the Canadian Shield, were organized in groupings that rarely exceeded 500 people. As a result, it is very difficult to speak of the Anishinaabeg as a whole at this time in history. Early French accounts of encounters with these people speak of Amikwa, Nikikouek, Mississauga, Saulteux, etc. The name Ojibwe referred originally to one particular group residing on Lake Superior but came to be applied to all who speak a particular Algonkian language.  Today, the preferred name is Anishinaabe (plural – Anishinaabeg) which includes the Potawatomi, Algonquin and Odawa nations.

Early accounts of these people tell us that they lived by hunting, fishing and gathering wild foods, such as berries, wild rice and maple sugar. Along Georgian Bay, a crop of corn may have been planted but was not relied upon as a staple. Corn was also acquired through trade with the Wendat. Fishing was extremely important as a food source. This activity drew the various groups to established fishing grounds for a number of months each year. The rapids at Sault Ste. Marie are particularly famous as a gathering place for fishing in the late summer. During the summer months, various clans and bands often assembled on the lakes and rivers. Fishing was the primary purpose of such gatherings but social activities figured prominently in summer activities.

The rest of the year was spent in less settled activities. Hunting big game required an extensive range. Bands would break into smaller family units for the winter and camps would be established in pre-arranged areas. The Anishinaabe peoples of the Canadian Shield cannot, therefore, be said to occupy a particular geographic spot. The Iroquoian peoples of southern Ontario resided in villages and these settlements were the locus of group activity. The Anishinaabeg and their northern neighbours, on the other hand, inhabited ranges spread over vast tracts of the northern forests.

The onslaught of Haudenosaunee aggression in the mid 17th century forced the more southerly groups of Anishinaabeg to flee northwest and must have been the primary cause for the disappearance of many of the groups encountered by the first Europeans. These groups likely merged with closely related neighbours as opposed to dying out. By any account, the 17th century was a time of rapid change for the Anishinaabeg. Contact with Europeans had brought material benefit but also disease and the introduction of new and potentially divisive ideas. Although First Nations had traded extensively with each other before the arrival of the Europeans, former patterns of life were radically altered by the requirements of the fur trade. Whereas in the past, trade had brought luxury items, such as decorative shells, supplementary foodstuffs and other materials not available locally, like tobacco or native copper, the fur trade created a dependence on trade.

European accounts suggest that indigenous peoples lost the ability to fashion tools in the traditional manner within a very short time after the arrival of European trade goods. Disruptions in the fur trade, such as that caused by the destruction of Wendake, created real hardship for First Nations. While beaver hats were a luxury item for Europeans, metal tools had become a necessity for many indigenous groups throughout North America. Once the gun, for instance, had been introduced as the primary tool for hunting big game, ammunition became essential. Transitioning from being a people who provided for almost all of their own basic needs, aboriginal people had become dependent on European goods.

Trapping fur-bearing animals occupied a great deal of time for First Nations people. This naturally took aboriginal hunters from other activities that had previously occupied their time and energy. This shift to the pursuit of trade items rather than the big game that traditionally provided a fairly large part of their diet caused occasional famine among northern groups.

With the collapse of the Wendat trading empire, the French sought to deal directly with the nations of the upper lakes, such as the Ojibwe. Missions began to appear in this area in the mid 17th century and the important post at Michilimackinac was established in 1660. To some extent the Odawa, a group closely related to the Ojibwe, became the new middlemen in the trade, but the Ojibwe too found an enhanced role in the trade.

The attacks of the Haudenosaunee began to slacken toward the end of the century and there is ample evidence to suggest that the Anishinaabeg began to turn to the offensive. Around the 1690s the Anishinaabeg embarked on a steady expansion that would see them replace the Haudenosaunee in southern Ontario and move into the lower Michigan peninsula. What motivated this expansion is unclear. Pursuit of the Haudenosaunee and an increased means to defeat them may have drawn groups of warriors into southern Ontario initially. The military defeat of the Haudenosaunee in southern Ontario would have created a void too tempting to resist. The establishment of French forts and trading posts at Detroit in 1701, Toronto in 1720 and Niagara in 1725 may have attracted more migration from the north. Certainly, the French actively encouraged First Nations to settle around Detroit. This, no doubt, drew many groups into Michigan but also southwest Ontario. 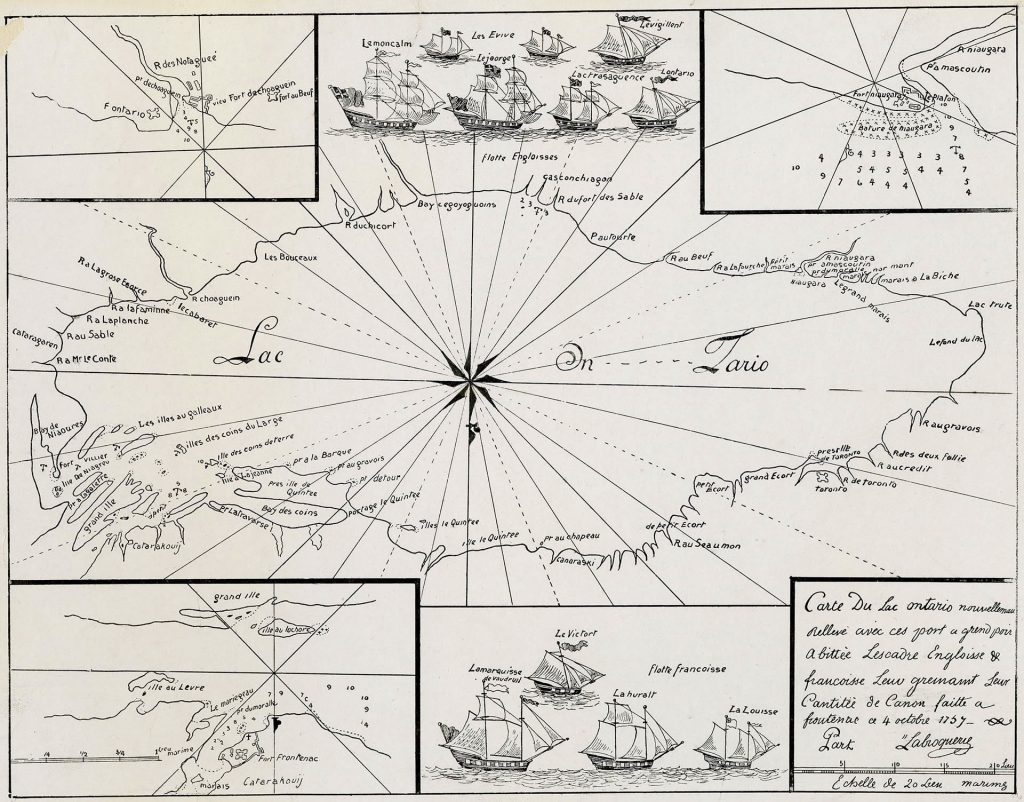 The Haudenosaunee had established settlements in southern Ontario, particularly on the north shores of Lakes Erie and Ontario. Their passing goes unmentioned, for the most part, in European accounts of the period but, by the beginning of the 18th century, the Haudenosaunee settlements were gone and Anishinaabe people from the north had replaced them as the residents of southern Ontario.

The war is rarely mentioned in historical accounts of the time period; the reasons are twofold. There seems to be a paucity of eye-witness accounts by Europeans as the French did not have a strong presence in southern Ontario due to their general antagonism toward the Haudenosaunee. Furthermore, the war had little impact on the struggle between French and English for hegemony in North America.  As a result, Euro-Canadian scholars have, until recently, shown little interest.

Evidence of the war is, to some extent, based on archaeological evidence. Some incidental mention of hostilities is also evident in contemporary French accounts. Perhaps the best record of the war, however, comes from the oral histories of the combatants. It is interesting to note that Simcoe County may have been a battlefield in the war. One major clash seems to have taken place near Penetanguishene and war parties assembled for action further south at the Narrows in modern-day Orillia, Ontario.

The exact date for the arrival of the Anishinaabeg in the Simcoe County area is unclear, but by 1710, residence around Matchedash Bay is certain. Direct mention of these people is rare in written accounts of the time but we can be certain of their participation in the fur trade with the French forts in southern Ontario.